Malekula Seeds on Display during National Week of Agriculture 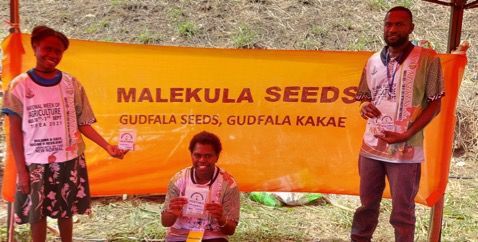 Two female farmers from North West of Malekula were amongst the male farmers who are participating in the second National Week of Agriculture (NWA) on the island of Tanna, that will end tomorrow, Friday 3 September 2021.

One of these female farmers, Linda Sammy, who is a vegetable farmer says she started to produce her own seeds since the beginning of this year 2021.

“These vegetable seeds are Open Pollinated) local seeds from my farm that I preserve them for replanting.

“One of the advantages of producing my own seeds is that I no longer purchase packet of seeds from shops.

“I have distributed these local OP seeds to other interested farmers as well to ensure we maintain our local varieties of vegetables,” vegetable farmer, Linda Sammy stated.

“I was fortunate to attend several trainings on seed preservation that was organized by the MALAMPA Vanuatu Skills Partnership late 2020 and with the assistance of the Assistant Agriculture Officer located at North West Area, I was motivated and started to produce my own seeds.

“The price of the packets of Malekula Seeds ranges from VT 80 to VT 130 depending on the weight of seeds, for example, 50 grams of corn seeds is VT100 per packet, five grams of bean seeds is VT 100 and one gram of capsicum and tomato seeds is VT 130 per packet.

“I was overwhelmed to see that farmers from other provinces were interested to purchase Malekula Seeds.

Vegetable farmer, Sammy stated “This is my first time to participate in such national agriculture event and I am so proud to represent other female farmers of Malekula and MALAMPA province in this event.

“This is a great opportunity for me as I have learned a lot from other farmers and hopefully, I will share my experience with other female farmers who were unable to attend this event as we will continue to produce our own local vegetable seeds.”

Linda Sammy also received a prize on Tuesday this week on behalf of other vegetable farmers of Malekula from the Department of Agriculture and Rural Development because of the locally produced Malekula Seeds.