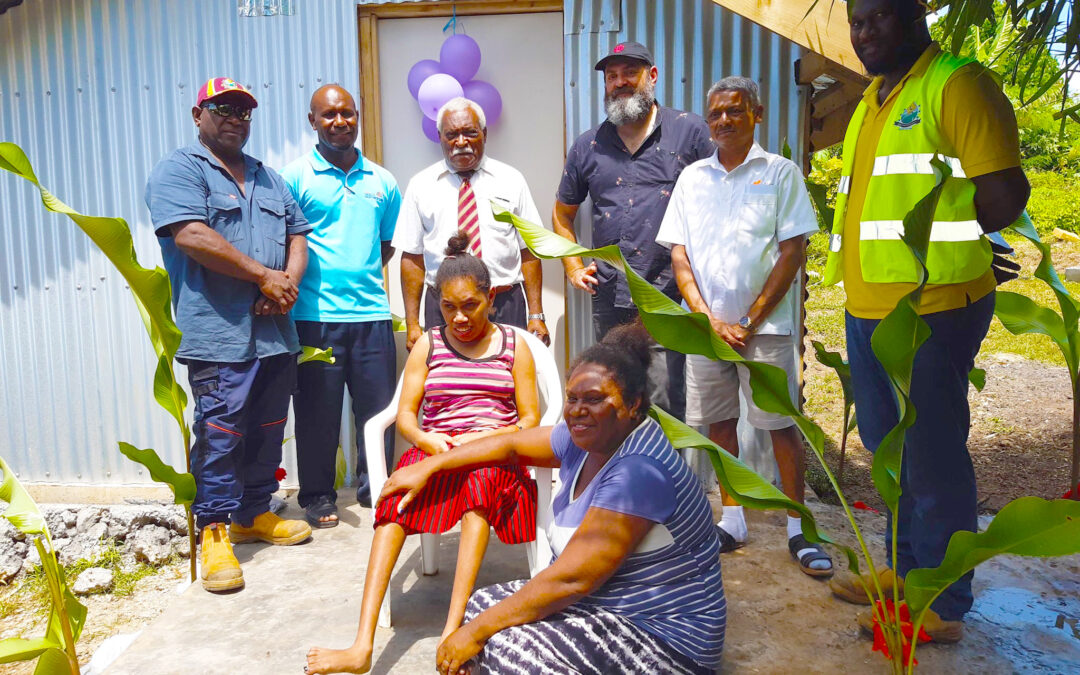 This week marks a significant milestone in SANMA Province as communities continue on the path of recovery from the devastating impacts of TC Harold.

Four semi-permanent houses were officially handed over by the SANMA Provincial Shelter Cluster lead and representatives from Alliance Française de Port Vila and the Vanuatu Skills Partnership to vulnerable community members with disabilities in Luganville area who were disproportionately affected by the disaster. Hundreds of people in SANMA province have been without shelter. People with disabilities especially have found themselves struggling to secure safe and satisfactory shelter. These houses have been constructed as part of the TC Harold recovery phase to help them to rebuild their lives and make a productive contribution to their communities.

The construction of these four houses was completed through an innovative multi-partner collaboration. This comprised the SANMA Emergency Operations Committee, Shelter Cluster (Public Works Department), Gender and Protection Cluster, Alliance Française de Port Vila, SANMA Skills Centre under the Ministry of Education and Training and the Vanuatu Skills Partnership, which is supported by the Australian Government.

Emergency Operations Committee and led by the Shelter Cluster. The Public Works Department provided the design and specifications for the construction of the houses. The selection of the housing sites for was done by Sanma Gender and Protection Cluster team. The total funding for the project amounted to approximately VT979,112. The Alliance Française de Port Vila generously funded the cost of the building construction material in support of provincial recovery efforts.

Mr Georges Cumbo, AFPV director said they have supported disaster recovery efforts in the past and will continue to.

“The Alliance Française acknowledges those who responded to its call for solidarity after the destructive passage of Cyclone Harold last April, specifically, the Lycée Française de Port Vila have who have raised a good portion of the funds used for this operation,” he said.

“We would like to also acknowledge the support from Solidarité Vanuatu with friends of the Alliance Francaise de Port Vila.”

Through the SANMA Skills Centre, supported by the Vanuatu Skills Partnership, 16 construction trainees were taught a range of technical and disaster-recovery related construction skills during the project.

Mr. Moses Nalau from Aore Adventist Academy and Max Arnamu from Pektel Rural Training Centre delivered on-site theory and practical construction skills training over the course of eight weeks culminating in the completion of the four houses. During the construction period the trainees completed units of competence from the nationally accredited Certificate 2 in Building Construction qualification. The trainees now can embark on a pathway to employment and further upskilling.

As a result of the temporary house project the trainees are prepared and equipped to contribute to disaster recovery efforts in the future in partnership with the Provincial Government, Shelter Cluster, and the local community disaster committees.

Lead trainer Mr. Nalau is excited at opportunity to train and upskill youths in the construction sector.

“I am excited to facilitate this training which provides opportunity for young people to focus on building a career. Most young people engaged in this project are school dropouts with little to no experience in the field. Seeing the smile on the faces of project beneficiaries is a privilege knowing they would now have better living conditions as compared to their housing situation immediately after Cyclone Harold. We need more projects as such to create the avenue to engage more young people and in turn provide them with the necessary skill to locally lead disaster recovery work in the future.”

The SANMA Shelter cluster and its partners have supported the construction of nine emergency shelters since March this year. The model is proving to be an effective, efficient and rapid response to support the most vulnerable in emergency and disaster situations and comprises of disability access ramps.

Local construction contractors are also benefitting from flexibly-delivered skills training so that they can meet the demand for more resilient housing and provide employment for local construction workers.

As a much welcoming gesture, Wilco Hardware in Santo has handed VT20, 000 shopping vouchers to each emergency shelter recipients. 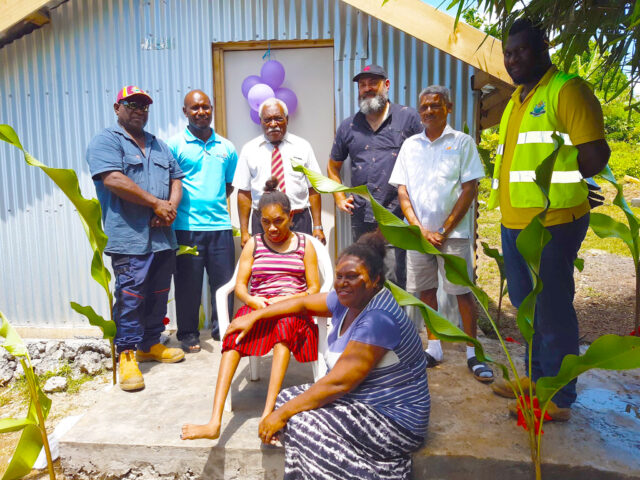