Agritourism in action in Santo through ‘Farm to Table’ workshops 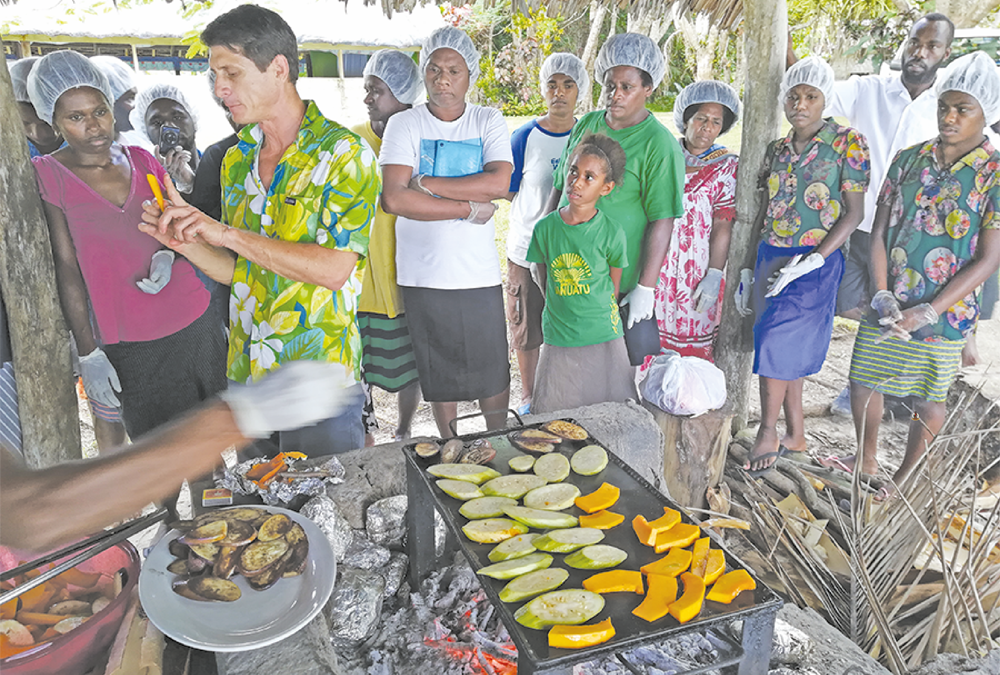 Friday 18 May, 2018 saw the closing of a three week series of Agritourism workshops & coaching activities in Santo facilitated by the Department of Agriculture and Rural Development, the Department of Tourism and the Sanma Skills Centre. The initiative was supported by the Vanuatu Skills Partnership (TVET), which is co-funded by the Australian Government.

Twelve Santo-based farmers and forty-four local chefs and tourism operators, including thirty-eight women, took part in the initiative which aimed to promote a ‘Farm to Table’ concept in Santo. Twenty-five other interested agricultural partners also joined the field workshop sessions which included representatives from the Vanuatu Agriculture Research and Technical Centre, and through Vanuatu Agriculture College.

The two Agriculture coaches spent a week with key farmers in Santo to understand the fresh fruits, crops, and wild harvest available. The two coaches and the farmers presented their agriculture findings to the tourism team consisting of Gabriel Levionnois, as well as local coaches, Rollyne Liu and Leonid Vusilai. The tourism team and restaurant operators in East Santo then dealt directly with the farmers to source ingredients directly to use for this ‘farm to table’ skills development workshop.

Tari Molisale from the Department of Agriculture and Rural Development stated that:

“After tasting all the dishes that were prepared during this workshop I need to say they were delicious and this is a great initiative. Our Sanma-based key farmers associations now have a direct market with the local chefs who, in turn, now know how to use local produce to cook for tourists and now understand what our farmers can produce.” Through this ‘Farm to Table’ initiative it is expected that tourism and restaurant operators will continue to strengthen the relationship with not just the farmers but fishermen, livestock farmers and also make use of wild harvest or bush cabbages and nuts.

The ‘Farm to Table’ concept is directly in line with the National Agritourism Plan of Action under the joint guidance of the Ministry of Agriculture, Livestock, Forestry, Fisheries and Biosecurity and the Ministry of Tourism Trade Commerce and Ni-Vanuatu Business.

Launched in 2016, the Action Plan that promotes the support of Sector Linkages through increased interactions between local producers and the tourism sector.

Ruth Seketa, Administration and Finance Manager, Vanuatu Skills Partnership stated that “the Partnership is grateful for the relationship with the Sanma Provincial Government and it is important to continue to maintain that relationship so that skills can be provided to our people for the economic growth of the province through these key productive sectors.”